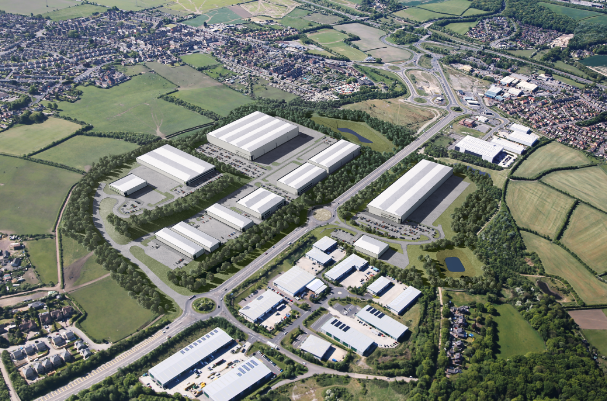 Harworth Group has received a resolution to grant planning consent for the second and third phases of its Gateway 36 employment development in Barnsley, Yorkshire.

Barnsley council has granted consent for up to 1.1 million sq ft of new employment space across 95 acres of land, to be brought forward in two phases.

The proposed units will be suitable for light and general industrial use, storage and distribution.

Consent was also permitted for a new link road from the existing Shortwood roundabout running south to serve phase two, alongside a new roundabout on the Dearne Valley Parkway with an arm to the north for phase three.

The first stage of Gateway 36 saw 145,248 sq ft of employment space built by Harworth between 2015 and 2018, comprising four industrial warehouse units and one drive-thru retail unit.

All three phases have been made possible by a £17.1m funding package from the Sheffield City Region Investment Fund (SCRIF).

Harworth will now be responsible for undertaking the site’s remediation and restoration works prior to it either selling to commercial occupiers or retaining it for its own direct development programme.

Peter Henry, regional director for Yorkshire and central at Harworth Group, said that receiving the consent following months of detailed work with the council was a major milestone.

“The region’s lack of well-connected employment space close to the motorway network is well documented and we hope to bring both phases forward as quickly as possible to bring new investment and jobs to Barnsley as we did with phase one.”

Joanne Neville, planning manager at Harworth Group, commented: “As for our other major schemes across the North of England, the ongoing development of Gateway 36 is strongly supported by a robust public-private partnership.

“Phase two and three of Gateway 36 could deliver up to 2,500 new jobs and I look forward to the team making this happen.”