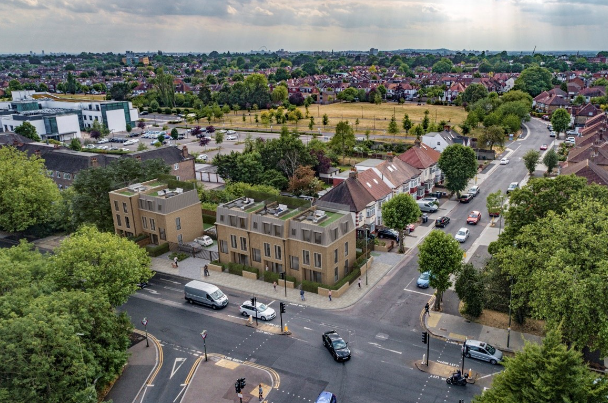 Developer Southern Grove has been granted planning permission to create a series of mews houses in Finchley, north London.

The scheme — Granville Mews — has a GDV of £5.5m, and is an example of how developers can take advantage of key infill sites to provide family housing in areas of high demand.

The townhouses will all benefit from a communal courtyard and three-bed, five-person accommodation, designed by Sheffield-based Axis Architecture.

Southern Grove has partnered with Mizen Group Co to complete the development and was advised by Savills.

“We’re delighted to partner with Mizen to complete what will be a series of highly desirable houses for families in a very popular area of the capital,” said Tom Slingsby, CEO at Southern Grove.

It claims they represent a “huge bank of land”, capable of providing hundreds of thousands of new homes, and are typically under-utilised by developers.

Southern Grove believes that there is a misconception that smaller parcels of land don’t deliver a great enough economy of scale.

However, it has pointed out that the speed at which such sites receive planning consent more than makes up for it.

“It’s clear to us that the thousands of infill sites across the capital represent a huge untapped source of land for new housing,” added Tom.

“The provision of sufficient numbers of new homes in London depends on much more efficient use of sites like these.

“We expect developers to show increasing levels of interest in infill sites over the coming years, which will allow London’s communities to make [use of] the best of pieces of land that are already urban but chronically underused.”

Southern Grove has two more infill sites in the pipeline to add to its family housing portfolio.

It has said it will continue to expand the use of infill sites alongside its other large-scale residential developments of apartments.