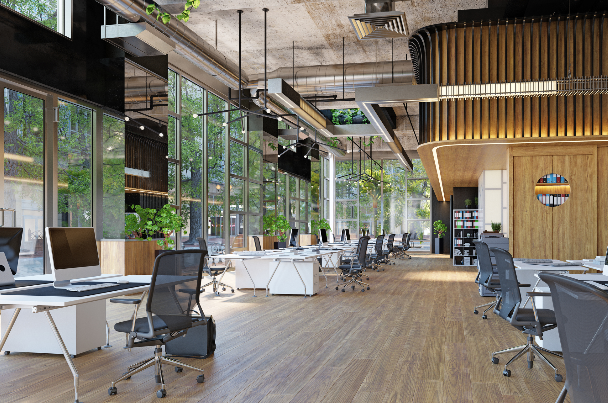 Occupiers in the South East are expected to experience a “chronic shortage” in office stock with strong sustainability credentials, according to Knight Frank’s annual M25 and South East Office Market Report.

With attainment of 2050 net zero targets Knight Frank believes regulations are likely to set a mandatory B EPC rating requirement for buildings by 2030.

This could exacerbate the current undersupply of new best-in-class spaces that meets the necessary sustainability credentials, as data shows that only 34.5% of vacant space listed in the South East at the end of Q1 2021 had an EPC of A or B.

“Going forward, net zero targets will be an increasingly significant factor in lease negotiations given that sustainable real estate is critical to meeting the UK’s 2050 target,” said Emma Goodford, partner and head of national offices at Knight Frank.

“As the regulatory framework to decarbonise the sector continues to tighten, a greater proportion of occupiers and landlords will need to assess and disclose their carbon footprint.”

According to Knight Frank, the South East office market is also affected by a slow development pipeline.

Consequently, the total availability represented in new, best-in-class space across the region was 8% at the end of Q1 2021 — the lowest level for 15 years.

This follows a busy Q1, which saw 784,170 sq ft of space leased across 44 transactions, representing the highest quarterly take up since Q4 2018.

The total amount of space under construction across the South East stood at 1.6 million sq ft at the end of March 2021, with 47% of this space already pre-let, further tightening supply.

With 2.4 million sq ft of speculative development having proposed start dates within the next 24 months, total completions could add a maximum of 3.3 million sq ft of new office space over the next four years.

“The leasing activity we witnessed in Q1 demonstrated a continued commitment to offices, particularly in Thames Valley locations with an established ecosystem,” added Emma.

“Despite the uncertainty around the role of the office and the expectation of dynamic and hybrid work patterns, take-up during the quarter was consistent with the 10-year average, and vacancy rates have remained below the long-term trend.

“With low vacancy rates in the highly sustainable office stock categories, and a slower development pipeline, we expect to see a shortage in new, best-in class space continuing to characterise the market until at least until 2025.”

Although Knight Frank predicts a possible office supply crunch for the South East, its M25 Innovation Index has identified Cambridge, Oxford, Brighton, Reading and Guildford as the five most innovative locations in the South East with the greatest prospects for resilience.

Simon Rickards, partner and head of South East offices capital markets at Knight Frank, commented: “It was encouraging to see Q1 investment turnover reach £482m, the highest level since the pandemic began, as sentiment continued to improve in the South East.

“Furthermore, there is approximately £700m currently under offer in the region, which points to a strong Q2.

“We are seeing a real focus on prime fundamentals, both in terms of real estate and for income deals, with the life sciences sector commanding record yields for the right opportunities.

“We believe that this flight to quality will continue for the foreseeable future, potentially to the detriment of the secondary market, where yields may continue to slip.”

Shawbrook Bank has provided a £17m development loan to Burnham Waters Ltd for a sustainable retirement village in Burnham-on-Crouch, Essex....

The Department for Levelling Up, Housing and Communities (DLUHC) has allocated a further £11m from the Brownfield Land Release Fund (BLRF) for 23 redevelopment schemes across 15 councils....

New insurance and financial advisory firm, J3 Advisory, has entered the property market to fuse insurance and funding for the betterment of its clients....

SME housebuilders could bring forward more than 55,000 additional new homes per year, adding £12.9bn in GVA and supporting nearly 200,000 jobs in the construction industry, according to new research by Savills commissioned by LDS Sales Guarantees....