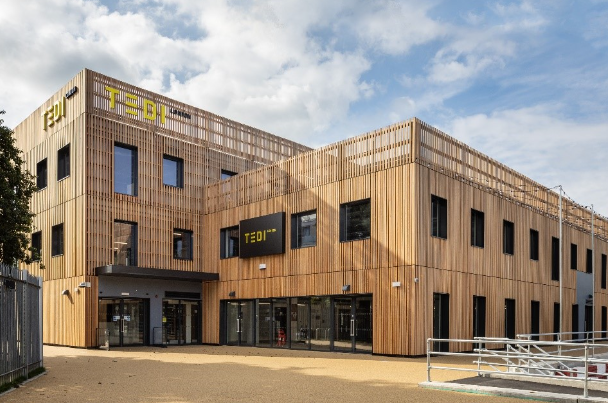 The modular campus took just under nine months from signing the agreement for the lease to the client taking occupation, welcoming its first cohort of full-time students this week.

Built in the UK, the building itself took just six weeks to construct once the modular components had arrived on site, minimising disruption to the local area.

At the end of its life, the building can be reused on site, relocated in its entirety, or stripped and recycled, contributing to the circular economy.

TEDI-London has taken an initial 15,000 sq ft of floorspace, including classrooms, breakout spaces and labs.

It has the option to expand up to 40,000 sq ft, which British Land will deliver in phases as the organisation grows.

In the long term, British Land will work with TEDI-London to deliver a permanent home for its students within the Canada Water Masterplan.

“In the current environment where some businesses are working through their space requirements, this type of modular solution provides a fantastic opportunity for customers to take space quickly, cheaply and sustainably, and allows them to grow with us into more permanent space in the future.”

Judy Raper, dean and CEO at TEDI-London, said: “We’re delighted to be setting up home in one of London’s most exciting and up-and-coming areas.

“British Land’s vision for Canada Water is a fantastic opportunity for TEDI-London and our staff and students to be part of a progressive, green, sustainable new urban space.

“Our students will be able to work on projects connected to and for the benefit of their local community, something which was a highly attractive proposition for us when choosing the location for our campus.”

TEDI-London has been set up with the aim of transforming engineering higher education, including diversifying the range of people studying and entering the profession.

The programme offers a Bachelor or integrated Master of Global Design Engineering, which cover a broad range of engineering topics, including civil, mechanical, electrical, electronic, and environmental.

Scholarships are offered for eligible Southwark residents, and there will be a bursary scheme to support students from lower-income households, as well as a local outreach programme.